What listening to Rusty Mae Moore taught me about narrative change 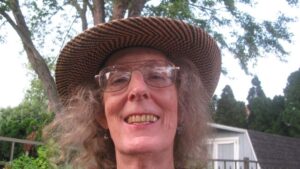 From 2015-2018, I was an interviewer with the New York Trans Oral History Project (NYTOP). A friend had convinced me to join because I love doing interviews and wanted to do something meaningful and concrete to support trans people. He reasoned that my inability to extricate myself from conversations made me naturally predisposed towards oral history. He wasn’t wrong, but that isn’t why I joined.

Years prior, I lost Donna, a brilliant friend and member of my community. Her death was a horrific, singular event in the lives of those who knew her, but it was not unique or uncommon. At her memorial, her friends, trans women who had lost many loved ones, said as much and made plain for all the cisgender people who were present, like myself, what such losses were doing to the community and to them.

After the memorial, some cisgender women thanked Donna’s trans friends for the “amazing speeches” and asked if they dabbled in theater, as though they had given a performance instead of a eulogy. It was a bizarre thing to say at a painful time, but touched on a deeper truth. I asked myself whether I’d ever really listened to trans people. Or had I been filing what I understood into a script of my own making – a narrative about trans lives and experiences foisted on us by structural transphobia?

When I first joined the NYTOP, the narrative foremost on my mind was that of oppression. The U.S. often seems hellbent on exiling trans people from schools, workplaces, hospitals, public housing, rehabilitative services, recreational centers, sports, music festivals – and even bathrooms. But oppression is just one narrative about trans life. There are narratives of care, creativity, humor, resilience, finding-a-way-where-there-is-no-way, mutual aid, and collective memory. These narratives weave their way through stories about trans survival, including a conversation I had with Rusty Mae Moore and Chelsea Goodwin, her wife.

Rusty Mae Moore passed away last month at the age of 80 and she lived an extraordinary life. She was a professor of international business, a polyglot, and a parent. She also used her relatively considerable resources to provide a home and sanctuary to trans people who would otherwise have nowhere to go. 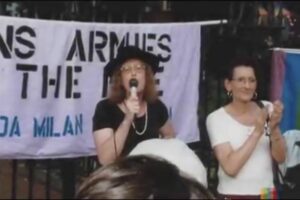 In the oral history, both Chelsea and Rusty talk about how social workers would learn about their home in Park Slope, dump transgender and gender non-conforming youth at their door, and drive away. Sylvia Rivera lived at their home for a time, too. They spoke about their (unsuccessful) efforts to push gay rights activists to include trans people in landmark anti-discrimination legislation. While doing this, Rusty continued to teach business at Hofstra, and frequently spoke about trans issues for the campus community. I was struck by how readily Rusty and Chelsea shared their resources, over many decades, with people who desperately needed a support system – or even just someone in their corner.

I was also moved by their sharp political analysis, sense of humor, memorable readings of pop culture (see Chelsea’s take on the Addams Family), and palpable affection for one another. Their commitment to organizing, writing, performing, and speaking about the meaning of their community laid the groundwork for the kind of narrative change that NYTOP has continued to nurture.

Narrative change lifts up many different kinds of voices and experiences, and it deepens bonds between communities. NYTOP gathered several hundred stories of trans and gender non-conforming people who are connected, in some way, to New York, and took the unusual step of making all interviews publicly available through a Creative Commons license, in collaboration with the New York Public Library. Like Rusty and Chelsea’s story, the oral histories that make up NYTOP not only recount the movements that trans communities shaped and the communities they built, they help us understand how much we need each other not only to survive, but to thrive.

Joan Didion wrote, “We tell ourselves stories in order to live.” That’s true, and we also need to tell, hear, and share our stories to live.