We Have Always Existed

Emily Ramirez is a queer Dominican woman, born and raised in NYCHA housing in Brooklyn, and is currently contracting with the United Nations as a social media specialist. She holds a Bachelor’s in creative writing and comparative literature, and has published works in Huizache, Girls Write Now: Two Decades of True Stories From Young Female Voices, and the literary journal, Wizards in Space. Her writing project is a novel about a 12-year-old Dominican American girl named Ellie who discovers her queer identity and her voice after falling in love with a girl.

This interview has been edited and condensed for clarity.

Narrative Initiative: Tell me about your book project for the Changemaker Authors Cohort.

Emily Ramirez: My project is about a girl named Ellie who is coming into her queerness. It’s like a Bildungsrom an (a literary genre that focuses on the growth of the protagonist from childhood to adulthood) of Ellie and how she’s growing up and the pervasive systems that she has to navigate as she comes into her queerness, specifically, through a relationship with her brother. [He] is a person that she admires and loves and cares for deeply, but he perpetuates [these systemic] ideas in her life. [There’s also] magic and the supernatural with Dominican folklore that I’ve grown up with in the background. It’s a backdrop to all of the pervasive oppressions that she’s going to deal with as she grows up.

Narrative Initiative: Okay, so I recently read a book by Cleyvis Natera, who’s Dominican and who wrote Neruda on the Park. She has a bit of folklore in there with the character of La Otra. Will your book include stories about spirits and things like that? And why is it important to include those stories in this work?

Emily Ramirez: The folklore doesn’t become a figure in the book or the novel. But … in our society, we debunk a lot of what I grew up with – feelings of the supernatural, or just feeling that there’s a presence or energy in the room. When I was little, my family used to call upon people from the past to talk to them. In the Dominican Republic, we say that people are gifted with un don. It translates to “gift” in Spanish, but in the Dominican Republic, specifically, it’s someone who has the power to connect to this other realm – or this other world that we know exists – and communicate with spirits. 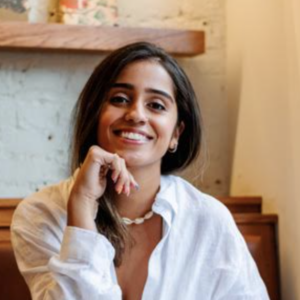 For example, when my grandma passed away, we had a prayer circle. We brought her back because we felt that her spirit hadn’t been able to pass on, and she talked to my grandfather. It’s so real for me, and it is so real for the character in my story. In college, I wrote this poem about El Cuco, a monster that terrorizes little kids in DR and eats them in a really gruesome way. When my brothers, cousins, and I used to play in the backyard at night and all the adults were inside, we were scared of El Cuco coming for us. So, in this poem, I compared my brother to El Cuco . . . because a lot of what I’m writing about is based on the fact that I didn’t have the best experience when I was coming out. My brother was homophobic and machista. At the same time, there is a duality there because I love him. In the book, you’ll see how Ellie navigates that. I want to captivate the readers so [they might understand] that you can love a monster.

Narrative Initiative: Okay, your story blends the folklore of your native country and the stories that you grew up with into the story of a young girl coming into her identity. How do you want to shift the narrative on gender and sexuality among people living in the Caribbean or in the diaspora?

Emily Ramirez: As I’ve been writing this book, I’ve stumbled upon more queer people of color in my home country in Dominican Republic. I actually went back with my girlfriend in July for a month. I fully plunged myself into spaces that were curated by queer people and Afro-Dominicans, and that served as safe places for us. Part of what I’m learning is that these spaces have always existed, but in the bigger cities. People always find their sanctuaries and have always existed, but their stories have just never been told to the [broader] world. So, how do we normalize these stories and make them part of the narratives that we talk about at home?

When I was coming out, my family rejected me. It was very traumatic; I didn’t speak to them for a year. Ellie has a similar experience when she’s growing up and coming out. But I think that, eventually, [my parents] came around. . . we haven’t really built the language to talk about . .these ideas. So, in this book, I want to give young Dominican people who are growing up, space to see themselves. This is the story that I needed when I was a kid.

Writing the story has been really traumatic for me, but during a coaching session, I was reminded of the fact that there are beautiful and really fun moments in the story. So, focusing on that, while I process the trauma that I’ve been through, has been helpful. Queer people exist and they’re happy, and we don’t talk about that.

Narrative Initiative: What do you hope your book will add to the language of coming out and Latinidad and queerness?

Emily Ramirez: That’s part of the work to create this book. There’s just so much pervasive hetero-normativity in Dominican culture specifically – the way we dance bachata, the way that we meet each other like In the Heights, the way that we talk about relationships. When I was little, I knew what was expected as a woman in the household. I knew how babies were made, even though my mom never fully explained it to me.

I want to talk about the fact queer kids are here and we just never give them the chance to just be. When I was little, I experienced my first kisses with girls. I would continue playing boyfriend and girlfriend because I could continue kissing those girls. It was a mask. I think [the book] will open up a conversation about how other kids might be queer and how to make them feel more empowered to step into that.

Narrative Initiative: I’m going to ask a personal question that you don’t have to answer. Do you know how old you were when you first realized that you were going to grow up to be a queer femme? Or, even if you didn’t call it that, that you were different than what was expected of you as a Dominican girl?

Emily Ramirez: I honestly didn’t know that I was going to be a queer person because I didn’t know what queer people looked like or what they were. I was about six years old when I realized that I was doing something that was bad. I grew up Catholic. I remember specifically knowing that what I was doing was extremely bad because I would say to the priest, “Hey, I did this” and he would tell me to do five Hail Marys and ten Our Fathers and repent.

I came out when I was 23. As a queer, femme-presenting woman, I could get away with kissing girls. It was more socially acceptable in Dominican culture to see two girls kissing because guys might find that attractive. The fact that I’m a woman is definitely a privilege in all of this. I think that experience is different for cis men who are poor or queer and trans women and men who are queer in DR. Those are the people I met this summer and whose stories I still need to learn more about because they do exist.

I’ve always had aunts and uncles who my mom told me were just crazy. I wonder if she thought that I was crazy when I came out. She’s more accepting of it, but now I’m like, “Why were you calling these people crazy? What did they actually do? And who are my ancestors that were queer in DR?”

Also, it’s so funny because in Dominican culture, the men will be super metrosexual, or they’ll present very femme energy, and that’s okay. I think it’s just easier to sort of pass as a straight person. For a very long time, I didn’t even allow myself to feel what I was feeling because I felt that it was bad. I grew up with this idea that I was a straight person. But, I also think that it’s harder to come into queer spaces as a very femme presenting, lesbian person. I actually just went to Berlin. I was interesting because I’m cis-presenting queer and we were going into certain clubs where they were creating safe places for queer people to exist. They turn you away at the door if you don’t present as “queer.” I’ve never experienced that in the US. I understand the need, but I’m like, Damn, I want to be part of this community too.

Narrative Initiative: With all of those dynamics at play, what do you want readers to take from this story about coming-of-age as a woman, queer, immigrant or other in this country?

Emily Ramirez: This is a hard question. I’m in a book club where we read different stories. I feel that each of us comes away with a different understanding of what a book is about and how it impacts us. And I think that’s also why it’s hard for me to talk about this book and actually get it done because it’s like, Damn, once it’s out there, how are people going to receive it? My purpose in writing this book is for the story to exist. As I was growing up, reading literature from DR and the US, I grew up reading about white girls falling in love with boys. And I read those books, and I liked them, but they just didn’t tell my story. As I’m growing up, I need more of those stories to exist. And I know that it’s not going to happen unless I write it down. . . I don’t want to continue being erased from history.

Narrative Initiative: Is there anything else that you would like to add that I haven’t asked?

Emily Ramirez: I can’t wait for my book to be in the hands of young people, people who are like me. Hopefully, people vibe with the story and see the beauty and the hardship that this character is experiencing and fall in love with her story and who she is.