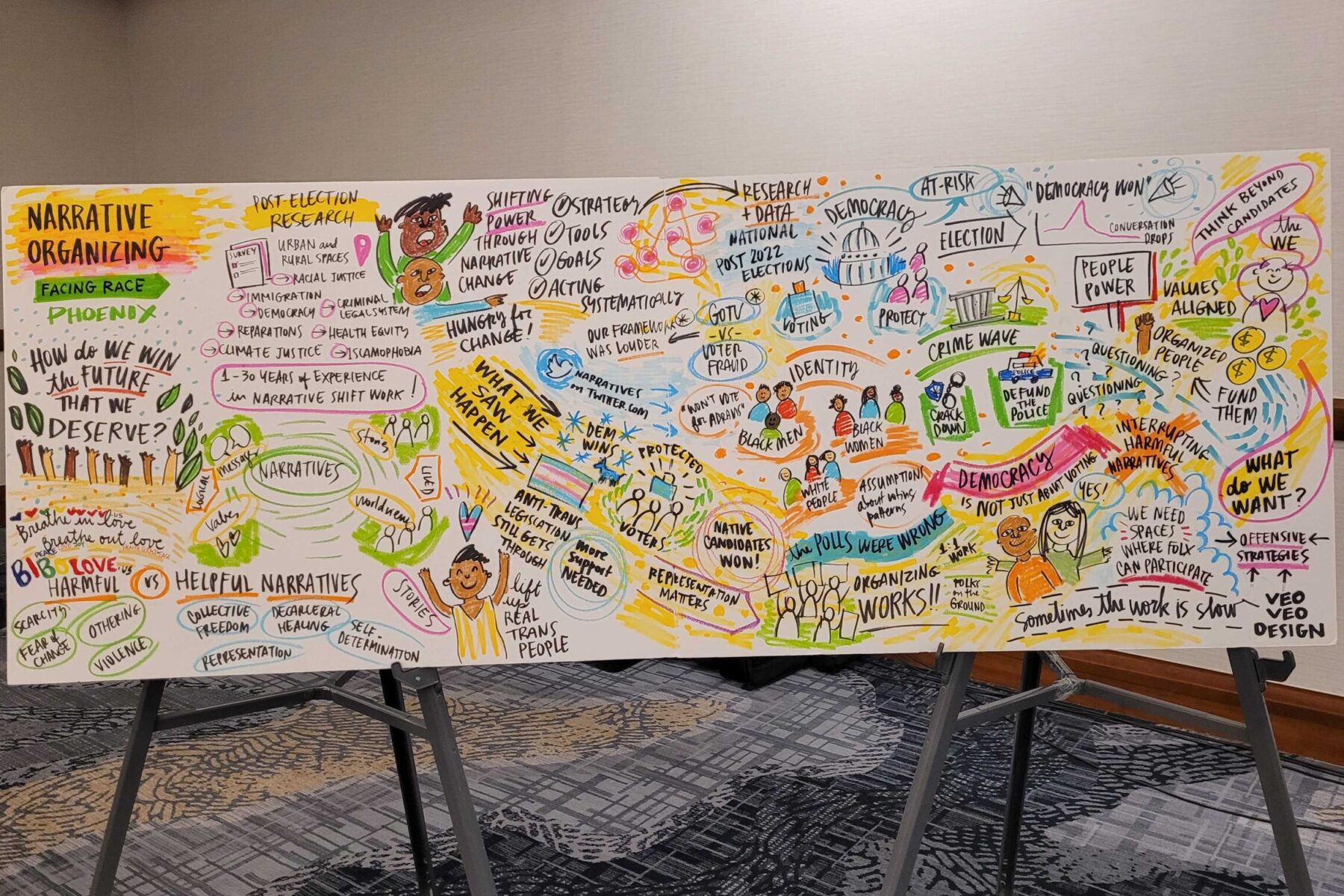 Two weeks ago, Narrative Initiative took our goodies to the Facing Race conference in Phoenix. The conference is sponsored by my former organization, Race Forward, so this was my first chance to see old friends in person since 2020. As always, this conference crowd is multi-everything kind, loving, joyful and determined. There’s no better place to be after an election than with 2500 people who are all about racial justice. Here are three of my highlights.

Going to places for work can feel like we’re just going from one generic airport, hotel and convention center to another. This time, I met local organizers, and they are impressive! Alex Gomez runs Lucha, which runs issue campaigns and leadership development programs, and Michael Soto, Chief Advocacy Officer of One Community. The very day I met him, Michael was celebrating the Senate’s decision to advance the Respect for Marriage Act, which would make marriage equality federal law. Alex’s organization is among those responsible for winning the Governor’s race and electing Mark Kelly. Election results follow long-term organizing – we have lots of positive and negative lessons to that point. We don’t always win when we organize, but we always lose when we don’t.

My second highlight is from Friday morning’s plenary, “Restorative Justice for Our Movement,” a conversation among four Black leaders. Everyone was great on this panel, but there was a real breakthrough from Sendolo Diaminah, who spoke to the ongoing churn in movement organizations, so much of it focused on internal change and critiques of leadership. Conflicts within and among organizations have always existed, but social media, non-profit union organizing, and changing workplace norms have escalated the effects of conflicts gone bad. Sendolo presented a balanced view of these dynamics. To paraphrase, they said that we are all responsible for the ethical use of power, no matter where we are in the system. “Top to bottom, bottom to top:” If you’re at the top, beyond formal positional power, people invest trust in you when you listen to them and try your best to support their aspirations and needs. If you do that poorly, you may have to leave leadership and learn for a bit. But if you aren’t at the top of a system, you still have power to affect the reputation of the organization and its leadership. Sometimes, your power can remove that leadership. Such power also must be used responsibly.

My third highlight is from a panel on lessons from the election that the Alliance for Just Society hosted. My friend LeeAnn Hall, really one of the best organizers I know, said, “You overcome the politics of division with the politics of addition, and trust gets built on the streets.” She told us about her time organizing in Idaho, where white residents often held racist perceptions of local Latinos, many of whom were farmworkers. At community dinners, LeeAnn said, it wasn’t a multiracial love fest; people sat with their own folks. But when it came time, all stood up to support the Farmworker Minimum Wage. Through action, Latino members learned who they could trust. LeeAnn noted that she herself had a lot to learn about race as an organizer, and people took the time to teach her, including our mutual mentor, Gary Delgado, who would signal the coming intervention with, “Let’s go take a walk.” She quoted myself back to me: we need lower litmus tests in these organizations so that people can actually join, but higher stakes where we fight for things that actually matter.

In addition to these highlights, there was dancing in the aisles, beautiful plenary openings by Lanette Diaz and Soyinka Rahim and spectacular food at Gallo Blanco, Pa’la, and Lom Wong.

One final reflection. I used to run Race Forward, from 2006 to 2017, and I have deep ties to the people who come to Facing Race. It was amazing to be there with a new team, and to see my movement homes together in the same neighborhood. The Narrative Initiative team worked with the Race Forward team to curate a popular Narrative and Communications track, co-host a narrative preconvening and bring the power of their own stories to the racial justice community. Life is made up of these full circles, which ground and liberate me.

Categories: Commentary, News From the Field