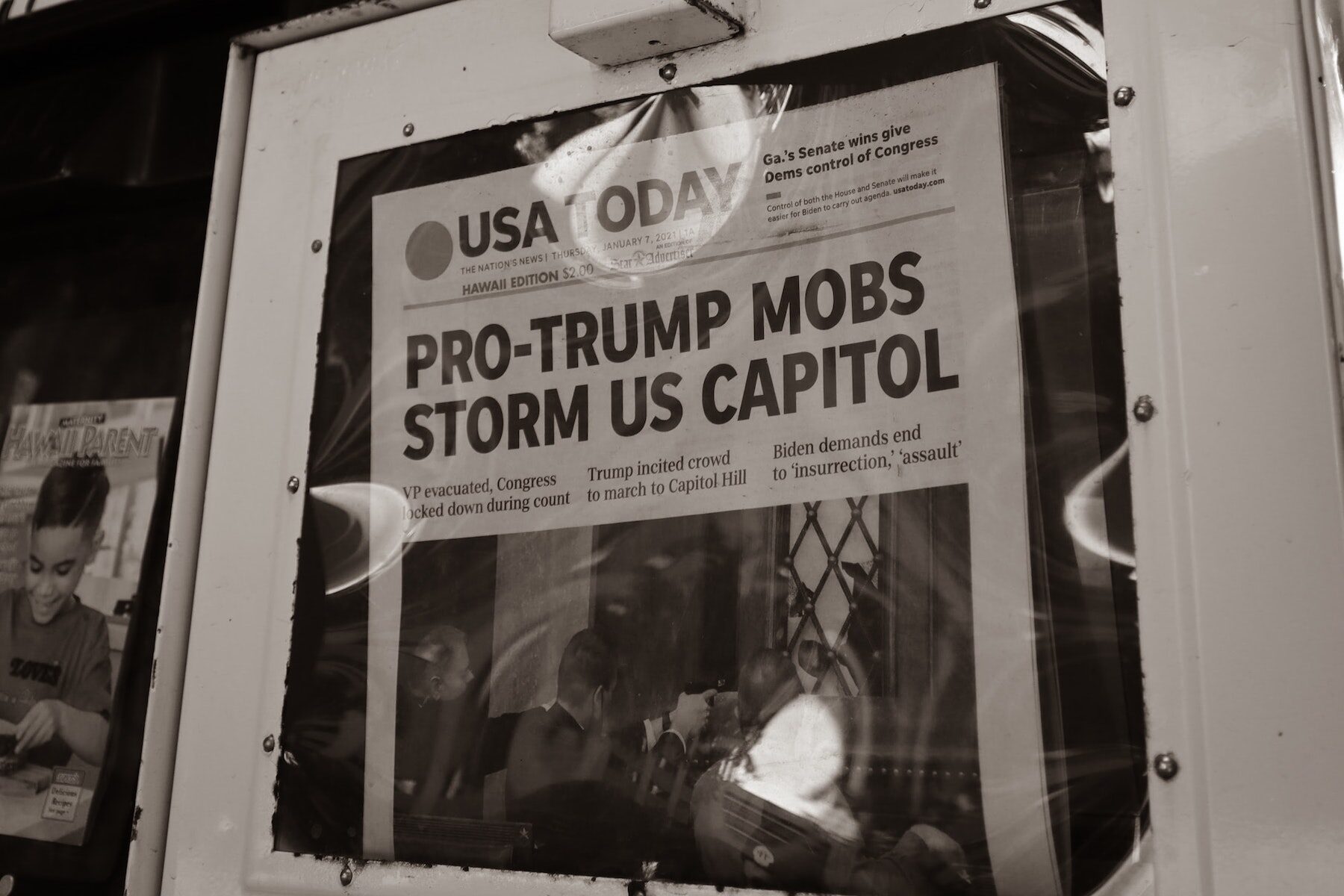 Narrative change happens fast in times of crisis and national trauma. Let’s look at how the “terrorist” stories of this past week (and the weeks and months after 9/11) shift American life. It’s also helpful to see how Arnold Schwarzenegger is using the moment to help us focus on and use a more hopeful and inclusive narrative.

I just started this job and my first public act includes writing about an attempt to overthrow the federal government. The mob that hit the Capitol last week and the ongoing threat of violence are disheartening for sure. But on the path to defending democracy are stories, lots of little stories that add up to a national narrative.

Narratives emerge both from what we do and what we say about what we did. Action opens the story. Reaction continues it. Here, I’d like to elevate some of the narrative debates and interventions that might take us, as a country, in the right direction. I’ll focus on the debate over what to call the people who carried out this unprecedented (in truth, not hyperbole) action and on what we can learn from Arnold Schwarzenegger’s entry into the discourse.

All stories have characters – protagonists, bystanders, heroes, villains. Many have angrily called the people who mobbed the Capitol “terrorists.” They are, after all, attempting to rule by violence, to intimidate all who disagree with their read of the election, and to impose their will on legislators and the nation. People of color are called terrorist all the time. Using that name here feels like a punch to hypocrisy, a bit of fairness inserted into a horrifying story.

Alas, history tells us that this characterization has some terrible consequences for the very communities we aim to support. In their Washington Post op-ed, civil liberties attorneys Diala Shamas and Tarek Z. Ismail note that federal actions following other acts of white supremacist violence have been turned almost entirely against communities of color. After the Oklahoma City bombing, they write:

The mighty blow came — not against the nebulous concept of “terrorism,” but against marginalized communities. It reduced criminal defendants’ access to courts; it made noncitizens who had lived legally in the United States for years suddenly subject to automatic deportation for minor offenses. The material support laws born in the AEDPA ballooned to encompass protected First Amendment conduct, landing hundreds of Muslims in jail. In 2010, the Supreme Court contorted itself to find that if a humanitarian organization gave legal advice to certain groups on peace negotiations, they would be committing criminally sanctionable material support to terrorists.

Of the writers and thinkers who gave us other opinions, I was most drawn to Omar Wasow’s Twitter thread naming these Trump constituents a lynch mob. He points to both material goals and narrative symbols that tied last Wednesday to the national shame of lynching: the fixation on getting the Vice President, Speaker of the House and Senate Minority Leader, the gallows erected at the Capitol, the celebratory atmosphere and the defense of “rough justice” as the only real kind. While there were certainly different kinds of people in that crowd, from the hard core paramilitary leader to middle-aged ladies defending election integrity, at the moment of note they all became one, as historian Terry Bouton noted in his eye-witness account of the mob.

There are two narrative lessons here. First, it’s tricky to shift a deep-seated stereotype in the short term (say, 50 years). It might feel fair to call them what they call us, but each time we use the word “terrorist” we simultaneously evoke images of the standard “other,” who, in this case, are Muslim and Black people. Second, by naming the specific goals of the Capitol mob, we can turn the country’s gaze on the specific problem of white supremacist violence.

If you had told me some years ago that I would someday be unironically quoting Arnold Schwarzenegger I might have thought you were messing with me, but I feel so grateful for his weekend video message to the nation (read a transcript here). Many people have seen it now, so let’s take the opportunity to learn from the artful composition of Schwarzenegger’s message.

Marshall Ganz, a long time organizer and the Rita T. Hauser Senior Lecturer at the Kennedy School of Government, has codified the practice of public narrative, and we can see all of its elements in this speech. Public narrative refers to the way we share our stories to invoke the values and emotions that drive people to action. It has three basic elements – the story of self, the story of us and the story of now.

Schwarzenegger tells us some things about himself in this video. He is an immigrant who knows about Kristallnacht because he was born in Austria just two years after WWII. His father used alcohol and family violence to deal with the “physical and emotional pain” of Nazism, as did other grown men around him. These were the “ruins of a country that lost its democracy.” This is the story of self that illuminates the speaker’s call to leadership. This story is a gift from Schwarzenegger to us. It’s a story he has never talked about publicly because it is so painful, but felt driven to do so by this urgent moment.

He then moves on to a story of us – our shared values and experiences. Nazism was based on “lies and lies and lies and intolerance.” He calls out Trump as the worst President ever, soon to be as irrelevant as an old tweet, and then turns to the politicians who have been pushing lies about a stolen election as spineless and complicit, as lacking a “public servant’s heart.” He puts the responsibility on Trump for seeking a coup, and separates him and lackeys from those public officials trying to do the right thing, and his crowd from all of us trying to do the right thing. We aren’t full Nazi yet, he says, but we have to be aware of the threat to prevent its growth.

Finally, Schwarzenegger talks about what is urgent to do now. He shows us the sword he carried as Conan the Barbarian, says that democracy can get stronger by having been through the fire, just like the sword gets each time it is tempered. His “story of us” is that we love democracy. The action he wants us to take with him, the urgent action, is to congratulate Joe Biden as the next President of the United States, and to wish him well. That is something every single person can do, no matter our circumstances.

There is visual, literary and musical art here. Some of it is cheesy. But if you can’t be cheesy in the face of a violent threat to democracy, then when? The combination of familiarity and novelty fed the video’s virality – a famous actor and past Governor is talking to us, but about things he’s never discussed before. He is positioned between two flags, showing us the geography he loves. The music is solemn but light, indicating that the situation is serious but savable. He quotes Teddy Roosevelt and John F. Kennedy, more familiar content.

Schwarzenegger has many resources, but these narrative practices are available to all of us regardless of wealth. We all have a story, we all have a goal, and we all have thoughts about what is required from us now. Putting them all together is a creative project that can also move our communities forward.

It’s good work, and I’m honored to be here doing it with you.