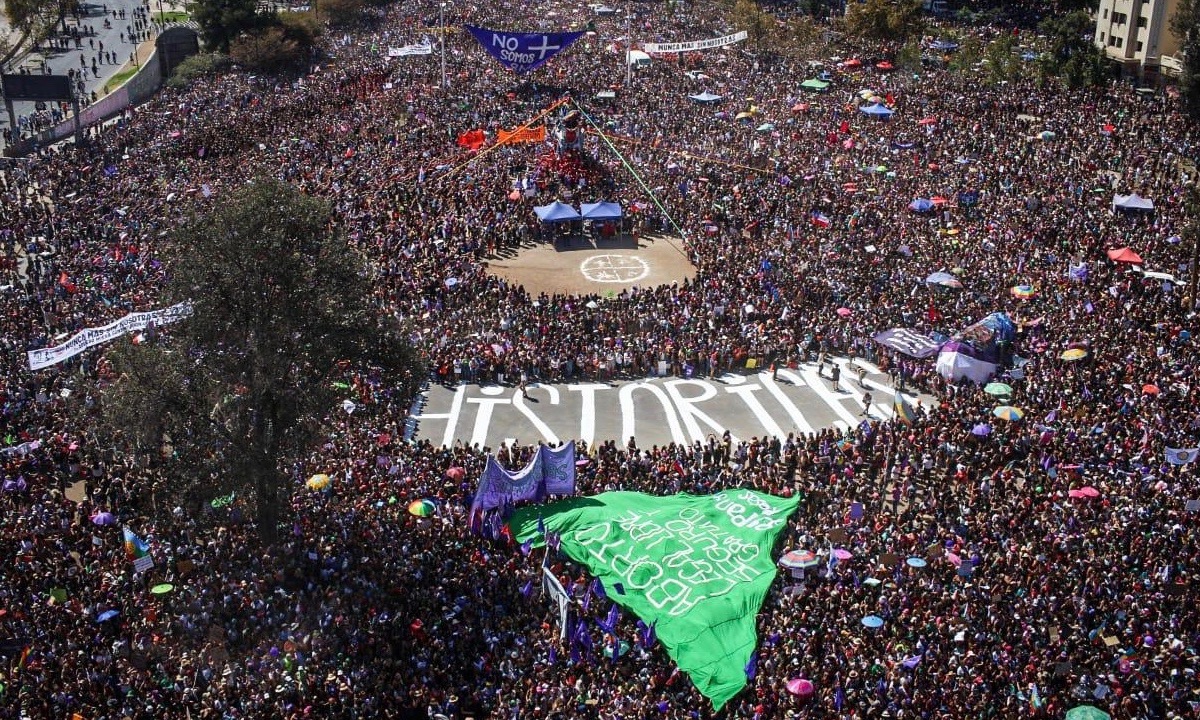 Feminist narratives are powering some of the most important movements of the 21st century by turning anger to joy, creating care in spaces of insecurity, and looking to the future.

The lyrics and dance of Un violador en tu camino (A rapist in your path) raise hairs – and eyebrows, depending on the audience. But this song is more than a feminist performance. It has become a global anti-authoritarian protest anthem, a call for feminist-led caretaking and mutual aid that’s grown louder as the pandemic exposes systemic inequalities and government callousness.

Lastesis, the young feminist-led collective in Chile behind the song, used creative media to show the world that young Chilean feminists were leaders of the country’s pro-democracy movement. But Chileans already knew this in principle. Feminist-led school occupations in 2018 had helped create critical momentum for the mass movement to rewrite Chile’s dictatorship-era constitution.

Building a bigger we

Feminist movements aren’t just naming the oppressors in angry and joyful protests. Beyond feminist performances, young feminists are also crafting a deep narrative of care connecting campaigns, issues and people. They’re expanding circles of “we” by creating narrative-rich avenues for participation and politics-making. Collaboration and performance helped create diverse, inclusive, and safer spaces for marginalized groups who want to participate in mass protests. Un violador en tu camino – the song, the dance, the open public display – is accessible to anyone to join in, film, photograph or share online. Decentralized and participatory, it traveled the globe and scaled up feminist activism. We witnessed public disobedience and occupation of space by women, often young women.

In Thailand, LGBTQ+ and young feminist activists created more inclusive spaces within large pro-democracy protests by organizing drag queen shows, dance performances, singing and dancing, including their version of Un violador en tu camino. Pride Parade, which happened across different cities in Thailand on 18 November 2020, became an opportunity to make feminist and LGBTQ+ demands visible. By carving out their own spaces within broader movements, they deepened the Thai pro-democracy movement’s agenda to include feminist demands: the legalization of sex work, the legalization of abortion, and marriage equality for people of any gender.

In Nigeria, feminist-led groups responded with care and mutual aid when the state used violence to quash #EndSARs protests. They cared for protesters, queer folks and all bodies in the community. Feminist Coalition, a young feminist-led collective that emphasized safety and well-being, offered a powerful contrasting narrative to the Nigerian government’s brutal repression of #EndSARS activists. A press statement on 21 October 2020 stated:

“From the onset of the #EndSARS peaceful protests the government has assaulted, harassed, and decimated several protesters through the police and other mobilized agents. The Feminist Coalition, and many other group of majorly young Nigerians have taken the higher ground – providing food, shelter, medical services, legal services, security, cleaning, and other supplies in order to keep the protests organized, unified and as safe as possible.”

Feminist-led caretaking and mutual aid are resonating amidst a pandemic exposing systemic inequalities and government callousness.

Gender-based harassment, inequality, and violence are old, systemic problems. Yet deep narratives portray these as individual failings. Feminist activists and movements are using the language of now to put down the old narrative:

We are fighting to stay alive now. We need gender justice now.

Part of the power of the words in Un violador en tu camino comes from their present tense. The song tells the listener that structural violence is immediate and ongoing:

These are narrative strategies for the long haul. They simultaneously strike a “timeless” tone but are immediately relevant. Ultimately, feminist movements must capture the public’s ever-shortening attention and use it to support structural changes.

Emphasizing the urgency of ongoing issues is challenging, but young feminists have focused on disruptive tactics and calling their issues emergencies. A wave of young feminist-led movements to address gender-based violence as a crisis has been hitting Namibia, Puerto Rico, Mexico, and other countries, as the COVID-19 pandemic exacerbates gender-based violence and gender inequality.

In Namibia, university students and high school girls have been leading the #ShutItDown movement, catalyzed by the murder of 22 year-old Shannon Wasserfell. Namibia reports at least 200 cases of gender-based violence every month. In Mexico, feminist activists declared a state of emergency because of the disappearances and murders of women. They began occupying government buildings across the country. In Puerto Rico, a young feminist-led movement to establish an official state of emergency of gender-based violence has come to fruition after years of campaigning – a victory for feminist movements and activists.

Building an understanding of systems and rejecting respectability politics

Popular culture and institutions normalize gender-based violence. Feminist movements look for entry points to catalyze anger and indignity around this and other structural issues. Specific events have been catalysts for protests against systems that have repressed and made invisible classes of people in the past.

The choice of confrontational language is deliberate and intended to call out apathy towards victims of gender-based violence and individual impunity. In Poland, feminist public performance has taken on an anti-state stance. Feminist activists are angry that they have to take to the streets every few months. Explicit slogans, “Fuck off” (“Wypierdalaj”), have become more common. This activism has helped the feminist-led campaign to legalize abortion catalyze a broader movement against a powerful Church and conservative ruling government. Both the ruling power and the Catholic Church have lost popularity due to Polish feminists’ sustained advocacy and persistent campaign to legalize abortion. The ruling government’s mounting criminalization of abortion has not slowed this growing movement.

Naming institutions and systems as oppressors is a rejection of respectability politics that shames and attacks feminist activists, particularly racialized women, for being “angry” and “too demanding.” Chilean feminists are referencing systems of oppression when they call out the state, government, and judiciary as “the rapist.” Invisible systems underlie gender-based violence, not just individual actions. This is strategic framing in media contexts that report on gender-based violence as sporadic phenomena and where the majority of people around the world still ignore rampant gender-based violence. Political institutions face a crisis of legitimacy, and young feminists are creating a wave of dissent with a broader understanding of systemic oppression that invites public anger and activism.

Feminist narratives are powering some of the most important movements of the 21st century by turning anger to joy, creating community safety in spaces of insecurity, and looking to the future.

Young feminists use narrative strategies, capacities, and tools both within and outside of mass movements to counter authoritarian, violent, and hegemonic power structures. Their narrative is participatory and shows the pain – and possible joy – of living together. It demands a future world of care and safety for all. As Chilean feminists say:

ahora que estamos juntas, ahora si nos ven.
Now that we are together, now they can (and must) see us.