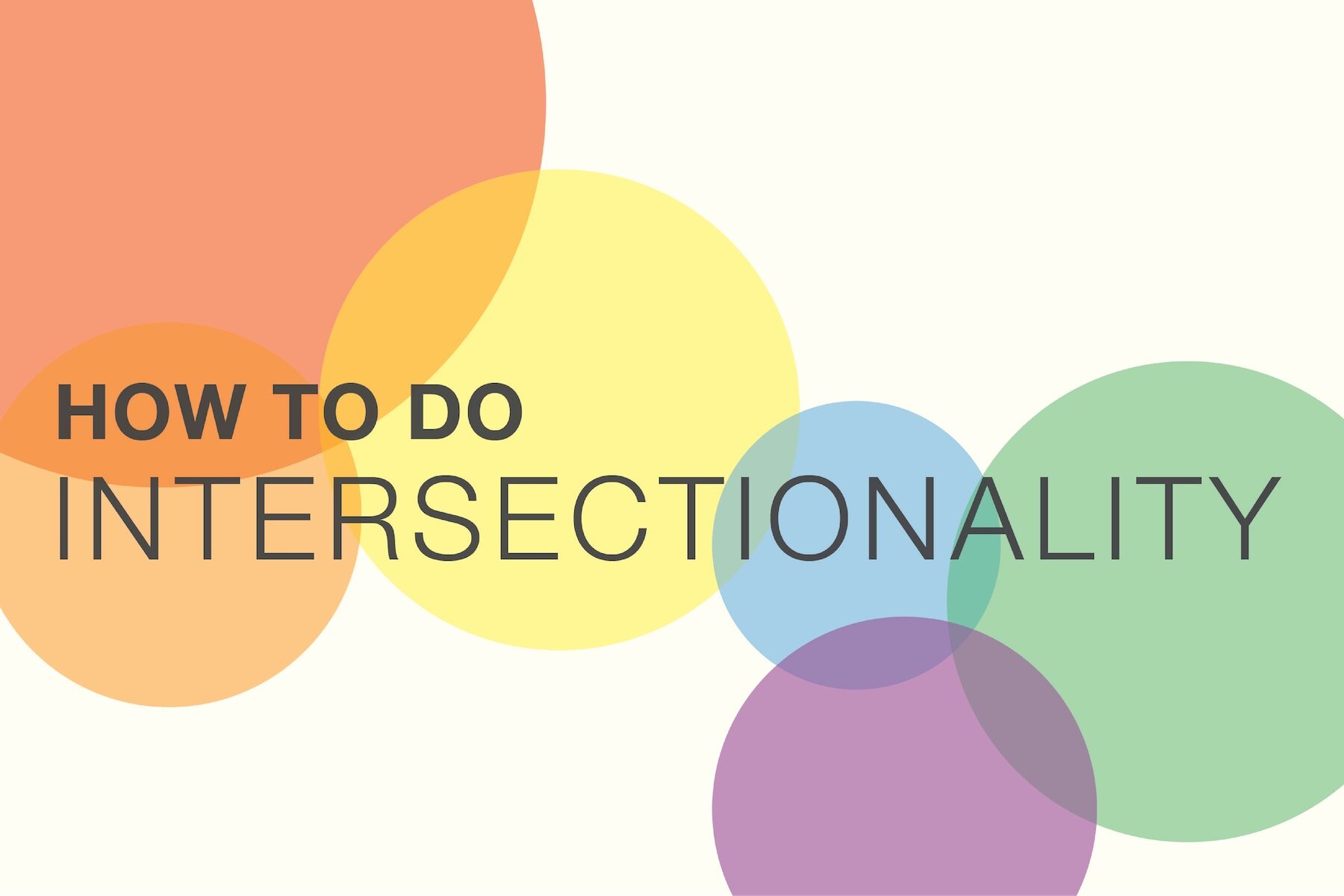 How to do Intersectionality

This article was originally published in 2017 by Rinku Sen.

Over the last five years, intersectionality has become a buzzword and an accountability standard for social change organizations and leaders. It is so commonly used that a recent look at #intersectionality results on Twitter reveals everyone from the United Nations Development Programme to IBM claiming it. But there’s also much confusion about what it means and how to practice it. Two patterns especially trouble me – conflating the word “intersectional” with the word “identity,” and applying intersectional analysis inconsistently. There are lots of great examples of intersectional organizing for us to learn from, and the pay off can be profound when we get it right.

An analysis, not an identity

A few months ago, I took the survey that measures my privilege posted by Buzzfeed India. There was a long list of statements like “I grew up with two parents” and “I’ve never been a victim of violence for my race.” I checked the ones that were true for me. I got the following message with my score of 36 out of 100 points of privilege. “You’re not privileged at all. You grew up with an intersectional, complicated identity, and life never let you forget it.” (emphasis mine)

But intersectionality is an analysis related to identity, not an identity in itself. Everyone has multiple identities. Systems of hierarchy have been created around our identities, and the combinations (or intersections) of those systems affect how life goes for us. Some of these identities give us a leg up, while others push us a rung down the ladder. The combination of identities can compound (or diminish) advantage or compound (or relieve) harm, and there are perhaps endless variations. The point of intersectional practice is to look at all these possible combinations of privilege and vulnerability, rather than just stopping with the ones that apply to us, whoever we are.

So we wouldn’t say that someone had a complicated, intersectional identity because we all have that. There is nothing more complicated about my identity than that of a white, middle class, straight man. The important question is whether those identities are explicitly acknowledged as we address any issue in community life.

Professor Kimberlé Crenshaw laid out this theory and called it intersectionality in the late 1980s and early 1990s, putting a name to something that had been the practice of Black feminists and other women of color for centuries.

When the primary subjects of anti-racist politics are men, and those of feminism are White women, the particular needs of women of color to be free from both racism and sexism are ignored at best and compounded at worst, often with life and death consequences. As a result, anti-discrimination law brings relief to only some victims. When we’re trying to get relief for women experiencing, say, police violence, the remedies are weak because they’ve all been designed with someone else in mind.

In domestic violence policy and practice, for example, feminists insisted that violence affects all women equally to prevent domestic abuse from being dismissed as a minority problem. “All women” were actually White, middle class women; policies created to address domestic violence assumed access to services that poor women of color did not have. Some battered women’s shelters required residents to participate in group therapy sessions, but monolingual Spanish-speaking immigrant women could not comply. The 1986 Marriage Fraud Amendment required immigrants to be married for two full years before applying for permanent residency. That rule created a barrier to reporting abuse and accessing resources – caught between the threat of violence and the threat of deportation, many immigrant women chose the violence. These policies and practices were created without an intersectional analysis.

Crenshaw’s recent work in starting the #SayHerName campaign expresses her critique of anti-racist strategy that isn’t also feminist. The campaign elevates the stories of women killed by police and seeks recourse in their cases, which receive far less attention than the killings of men. Andrea Ritchie’s book Invisible No More tells dozens of stories of Black women and other women of color being raped, beaten and killed by police. She names, among many others, Sandra Anton, Rosann Miller, and Alecia Thomas, whose situations mirrored those of Rodney King, Eric Garner and Freddie Gray, but whose names are unknown to most people. A truly intersectional analysis would identify the mechanisms that enable abuse and target those for change. Considering the intersection of race, gender and disability, for example, Ritchie calls for policies that do not involve police in addressing mental health breakdowns, but rely instead on community-based crisis interventions.

To be intersectional (and also effective), then, we have to consider how a problem plays out differently for different people, raising the likelihood that we will come up with remedies that actually solve the problem for all.

The qualities and skills that matter most for intersectional leadership are curiosity, listening, openness and creativity. By asking questions, we can look at a problem not just through the lens of our own experience, but also those of others whose identities might make them vulnerable to harm. Find out who else might be experiencing the problem you’re solving, seek them out (or respond when they seek you out), listen to them deeply, share your truth and apply that new understanding to your strategy.There are lots of great examples to choose from. The standard isn’t how intersectional is your identity, but how intersectional is your analysis? Regardless of identity, the analytic tools are always available to help us solve problems for everyone.

One of my favorite stories comes out of Idaho. In 2005, The Idaho Community Action Network (ICAN ), which organizes white, Native American and Latino poor and working class families, took up a campaign to get eligible children onto the State Children’s Health Insurance Program (SCHIP). Such children had been regularly denied enrollment. To diagnose the problem, ICAN ran a matched-trio testing project. They sent in trios of Native, white and Latino families that they knew were eligible and tracked the outcomes by race. Twenty-six of the 27 families were denied.

ICAN found that the long, complicated application form was a barrier – easy to check the wrong box and hard to figure out after it was done. The SCHIP office hours forced applicants to miss work to deal with the denial. But the group also found out that the Latina mothers were asked intrusive and racist questions like “how many of the kids in this family are ‘illegal?’” ICAN demanded a new form, new hours and new training for the caseworkers on dealing with immigrant applicants. If they hadn’t done intersectional research, accounting for race as well as class, they wouldn’t have solved the problem for everyone.

But what if you’re in a situation that isn’t so multiracial, or so multi, multi in other ways? There are legitimate reasons for a group not to include everyone. That’s why we have coalitions.

In Oregon, the statewide farmworker organization is called Piñeros y Campesinos Unidos del Noroeste (PCUN ) and has 30-year history of winning. By the early ’90s, conservatives had placed an anti-gay measure on the statewide ballot. When LGBT activists marched through the PCUN Director’s hometown, dozens of farmworkers met them at the edge of town – part welcome and part loving confrontation. The farmworkers invited the LGBT folks to dinner and dialogue, where they talked about why the movement had never reached out to farmworkers, and the sources of homophobia among Latinos.

Working together, the two communities beat that ballot measure, turning a 20-year trend. A year or so later, they beat back the first anti-immigrant ballot measure. They’ve been working together ever since, not just to resist the awful, but also to win the good. It’s not that PCUN had hundreds of out LGBT members, or even one as far as I know. The lesson lies in PCUN knowing that there are certainly gay Latinos, and that an attack on gay rights would strengthen the forces that also attack farmworkers. They do their work with an intersectional lens that doesn’t essentialize the farmworker as a straight man, or a queer person as exclusively white, and that led them to this alliance.

Many people think of “intersectional” as a stand-in for “most marginalized.” But that’s problematic, partly because “intersectional” isn’t an identity in itself, but also because “most marginalized” is so often defined by our own blind spots, created by whatever privilege we may have. Even those of us with disadvantaged identities have more power than some others. U.S. citizens have more power than immigrants; documented immigrants more than undocumented; undocumented children over undocumented adults. I could go on.

The problem with making “intersectional” a form of identity is that it hides true dimensions of privilege and power. Class privilege is often improperly weighted. I’m not saying that class trumps everything else, but money at the very least gives us more options for dealing with racism or sexism.

Buzzfeed tells me that I have almost no privilege – I am among the most marginalized. But my class privilege and positioning offer significant protection. My experience of airport security, for example, is greatly aided by my TSA PreCheck status, for which my organization paid the application fee. I get “randomly” stopped a lot, but not nearly as much as I would be going through the regular security line. If we use my experience but don’t take my class privilege into account, we might come up with a remedy for civil rights at airports that most people can’t access.

Here’s where I think we could be more consistent in our application. We tend to apply intersectional theory to the situations that strike our sympathy nerves. We recognize compound harm when there’s a person with several oppressed identities, like female, queer and rural, and a couple of privileged ones like able-bodied and employed. We can easily acknowledge that being able-bodied and employed did not wipe out the experiences of being a woman, being queer or living in a place the system had abandoned.

But when racial justice activists are confronted with a person who is white, male and poor, we too often act as if the whiteness and the maleness totally mitigate the effects of the poverty. They do not. How could they? Being white and male might lessen a lot of harm, but it could not possibly negate all the discrimination poor people face. If we are concerned with the situation of Muslim men with money, we don’t argue that the money or the maleness protects them totally from the harm of Islamophobia. We know that this could never be the case.

Intersectionality is an enormously helpful theory of identity, power and change. What we do with the complex analysis it generates is up to us, but the best examples suggest that there are a lot of people to organize and a lot of solutions to pursue. We can get to them fastest with a consistent and deep practice of, quite simply, looking at systems through multiple lenses. The point isn’t to get into smaller and smaller cohorts defined by identity, but to understand our lives and each others’, all the better to combine forces and win.

Edit: This story was corrected after its original publication in 2017. The 1986 Marriage Fraud Amendment was the source of the two-year requirement. The source was previously named as the 1990 Immigration and Nationality Act, which created a waiver for victims of domestic violence.