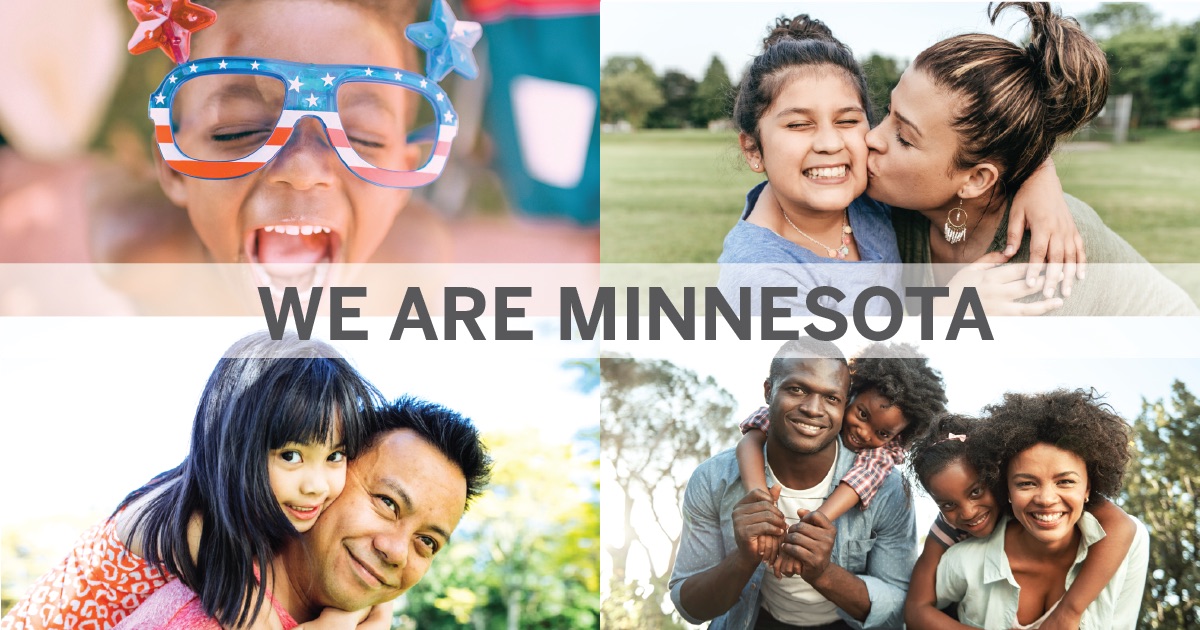 Building a Narrative Justice League: Learning from a nimble and powerful narrative coalition

Narrative change practice cuts across issues and coalitions. In January, we joined a roundtable of communicators and organizers to learn about the practices, skills and training that make narrative change in coalition not just possible but powerful.

Narrative change work happens in coalitions that use shared principles, time and trust to move forward together.

In Minnesota, a diverse coalition of progressive groups, currently called the Narrative Justice League, has been working together since 2010. The coalition has grown to include over 30 organizations. They support a shared progressive narrative implemented through legislative victories and policy changes that advance equality, justice, a healthy environment and other goals.

Representatives of the coalition joined the roundtable conversation. There, they identified three elements of their ongoing progress that we’ll explore in more depth below:

Build (and care for) a relationship infrastructure

Relationship building – slow, steady, supportive and meaningful collaboration over time – has been a key ingredient of the work in Minnesota. Relationships, not policies, help address and talk about deeper narratives of economic and racial justice that impact every issue in the coalition.

“People living through a crisis must recognize the need to come together,” says JaNaé Bates, Communications Director at ISAIAH, when talking about the role of relationship infrastructure in supporting narrative change work. In other words, the coalition has not forced engagement and relationships. It has been built on the recognition of need – having something to offer as well as gain. 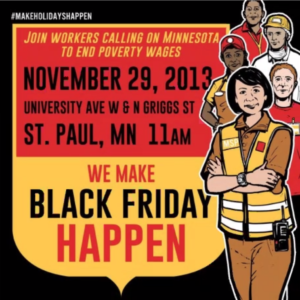 Collaborative public actions like this Black Friday event in 2013 were a way of building relationships and trust among narrative coalition partners.

Bates and others from Minnesota identified four keys to working as a narrative-driven coalition.

Relationship infrastructure takes attention. Here are some keys to building and supporting relationship in a narrative coalition:

Shared staffing and resources. Not every group has the same resources to contribute to a coalition effort. But some were able to offer more to make the project work. Larger organizations supported joint work and often worked with smaller organizations who didn’t have communications staff to help raise their profile.  In 2018, Take Action Minnesota also redirected their organizing director to work as organizing director for the coalition.

Keller also offered an early (2013) example of shared staffing. A “Mobile Communications Team” provided a place for staff from many organizations to meet, plan and work together on actions. The team provided increased capacity to smaller organizations so they could engage in meaningful coalition narrative work. 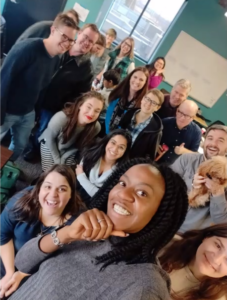 Building relationships into the plan. The Mobile Communications Team is one example of creating space for staff to plan and implement meaningful, often co-branded, work. The current iteration of the Minnesota narrative coalition, the Narrative Justice League, emphasizes a deeply intentional, in-depth model of relationship building that includes:

Coalitions working on narrative projects are often focusing on different legislative and policy priorities. They face other obstacles to success with a shared narrative, too. These could be as simple as geography (Minnesota is a big state) or as complex as race, organizational mission and religious background.

We all need to recognize the strengths of each group and community. Know who each group can speak to and trust each to sing from the same songbook.

We asked our Minnesota colleagues about holding onto unity among so many differences. JaNaé Bates’s response echoes the need for both trust and shared political analysis, discussed above: “We all need to recognize the strengths of each group and community. Know who each group can speak to and trust each to sing from the same songbook.”

“To go far, you need to go together,” Josh Keller reminded us. He pointed out that Minnesota’s coalition has spent years building relationships. Moving at a pace that works for everyone happens by design, Keller says.

A coalition built around diverse organizations and interests also tends to have a superpower that’s easy to overlook: a close connection to frontline communities most impacted by the deep narratives the coalition seeks to change.

Narrative research is one area in which the coalition used their diversity and proximity to those most impacted by the the issues to effectively do message and narrative testing. Research firms, says Bates, will test messages for a lot of money, but there are other approaches coalitions can take. She pointed to the example of a recent St. Paul referendum on collective trash pickup.

“We sat down in a leadership meeting and asked about the issue, feelings and messages,” said Bates of their research process.

“We took that and developed some preliminary messages in collaboration with the union. Then we poll-tested different messages with supporters of different coalition groups. We did all this research and testing with our people – the people who needed to come out and vote on the referendum.”

You may have noticed that relationship building and paying attention to “how we do this work together” are threads weaving their way through this story about coalitions doing narrative change work. Perhaps this is because narratives are built from (and often trying to shift) the community, cultural and personal values.

In Minnesota, organizers constructed and tended to systems that would reflect the values of the narrative they supported. They also implemented regular practices and ways of working that integrated the narrative. 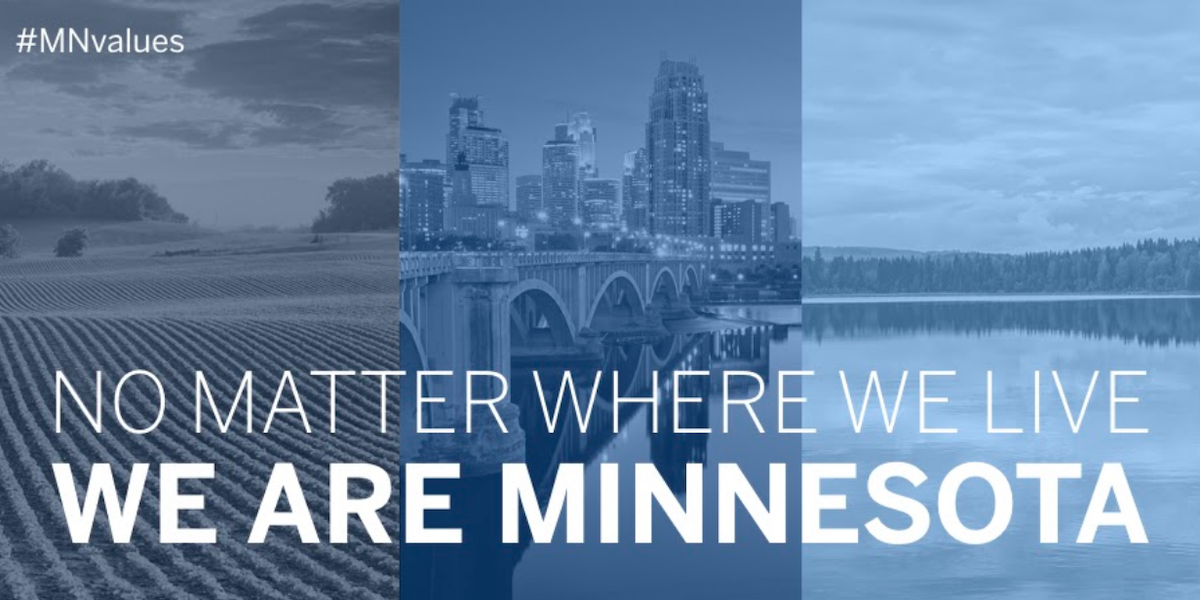 An example of Minnesota Values narrative and imagery. The #MNValues hashtag tied the online campaign together.

“Start with values based organizing,” says Kenza Hadj-Moussa, Director of Public Affairs and Communications at Take Action Minnesota. “Don’t start with the problem. Instead, start with narrative and values and build messages to address problems from there.”

The coalition identified the Race-Class Narrative as a centerpiece of shared values and messaging work. The group also identified “Minnesota Values” (aka #MN Values) that were common to every group, issue and message.

Doing the foundational work of identifying shared values and a shared vision early on, Hadj-Moussa said, enabled the coalition communications staff to act quickly and successfully. Because the coalition already had a strong foundation of trust and good systems in place, it was much easier to put out sign-on letters and mobilize joint rapid response efforts. “We could move fast because we had already shared political analyses and were grounded in shared values like care and compassion,” she told us. 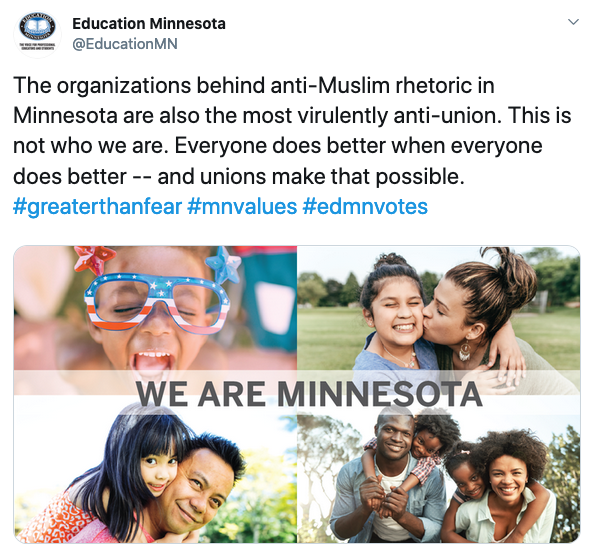 An example of online messaging from Education Minnesota, a coalition partner, that reflects MNValues narrative messaging in the face of anti-union and anti-muslim rhetoric.

In fact, since the roundtable discussion in January, we’ve seen that muscle in action. The coalition created Minnesota COVID-19 response, an effort firmly grounded in narrative strategy. The site includes shared policy demands, community resources, and ways for people to get involved. And it’s online in English, Spanish and Somali.

Build with Values to Shift Narrative

Over a decade, shared values have been a fertile ground on which a growing progressive coalition of organizations has changed the narrative in Minnesota. Shared values drive a focus on relationship building – even when that means moving slow. Operating from shared values also frees organizations to trust one another with resources and staff. And shared values help hammer out shared political analyses that let the coalition respond efficiently, plan actions, and test new approaches.