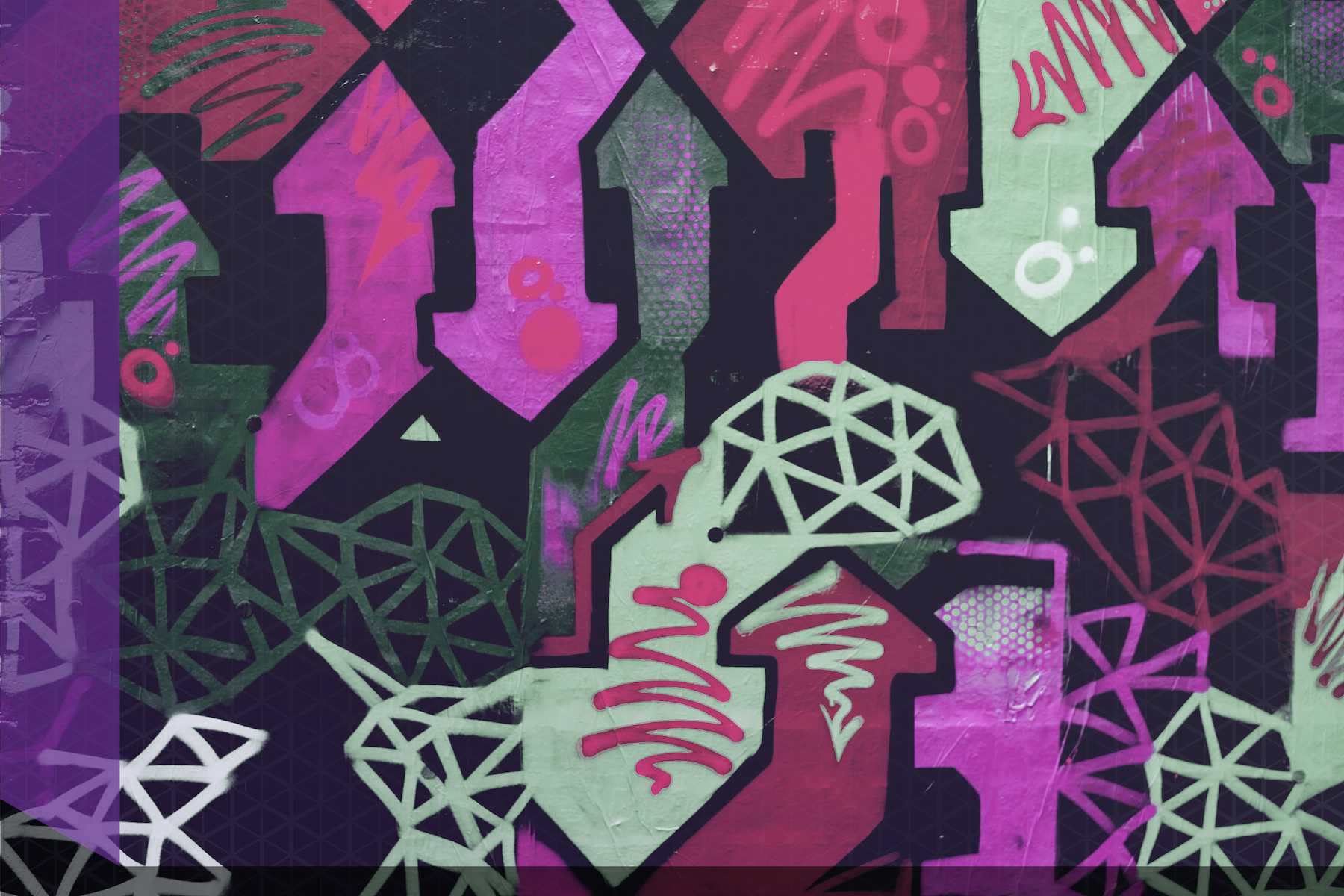 Narrative Initiative connects futures and narrative to create power. Futures work gives people space and tools to imagine a world free from the boundaries of historical narratives and the limits of today’s policies and politics. This work identifies the new narratives that make potential futures possible. Here we discuss why futures are important to narrative projects and how to use futures in your work.

Young children bring unlimited possibility to stories about their future. Children don’t have narratives bounded by history and precedent. Nor do children have deep political and social narratives defining their view of what’s possible. Simply put – they can access imagination. We find imagination to be both a necessary and strategic component to change. Futures work provides tools for bringing imagination to narrative in productive and tangible ways.

In 2017 and 2018, teenagers living in neighborhoods around the University of Chicago participated in the Transmedia Collage project. The project provided them with the freedom, guidance and resources needed to imagine new possible futures. They began by looking at community history. In these histories they found narratives defined by the past and still holding power. These old narratives weren’t just influencing the present. They defined the future’s field of vision. Dominant narratives, the teens discovered, force people into a future based on histories, not imagination.

Narrative Initiative program manager Márquez Rhyne shared the story of developing and running the Transmedia Collage project while working with the Transmedia Story at the University of Chicago. There, both history and imagination were doorways to a process that defined visions of the future, narratives creating that future, and the actions needed to create and control that future.

“Once we know the history, power and role of today’s dominant narratives we understand our present assumptions,” says Rhyne. “Then we can really name, describe and even map paths towards possible futures that aren’t dependent on today. That’s where this work gets exciting.”

There are many ways to approach futures, narrative and power. We use imagination as an onboarding tool to new narratives. We then identify the power needed to create and sustain narrative.

In other words, futures help us identify why we need power in the first place. In 2015, Ivana Milojevic and Sohail Inayatullah wrote about the role of power in narrative and how futures are a thread connecting the two:

Analysis of power is foundational to understanding which narratives succeed and which fail. To create change, first normalized categories must be challenged. Second, alternative futures and new worldviews are created and then, third, data and a new metaphor – a story – can be presented which supports the change and aids in creating the alternative future.
– Narrative Foresight, 2015 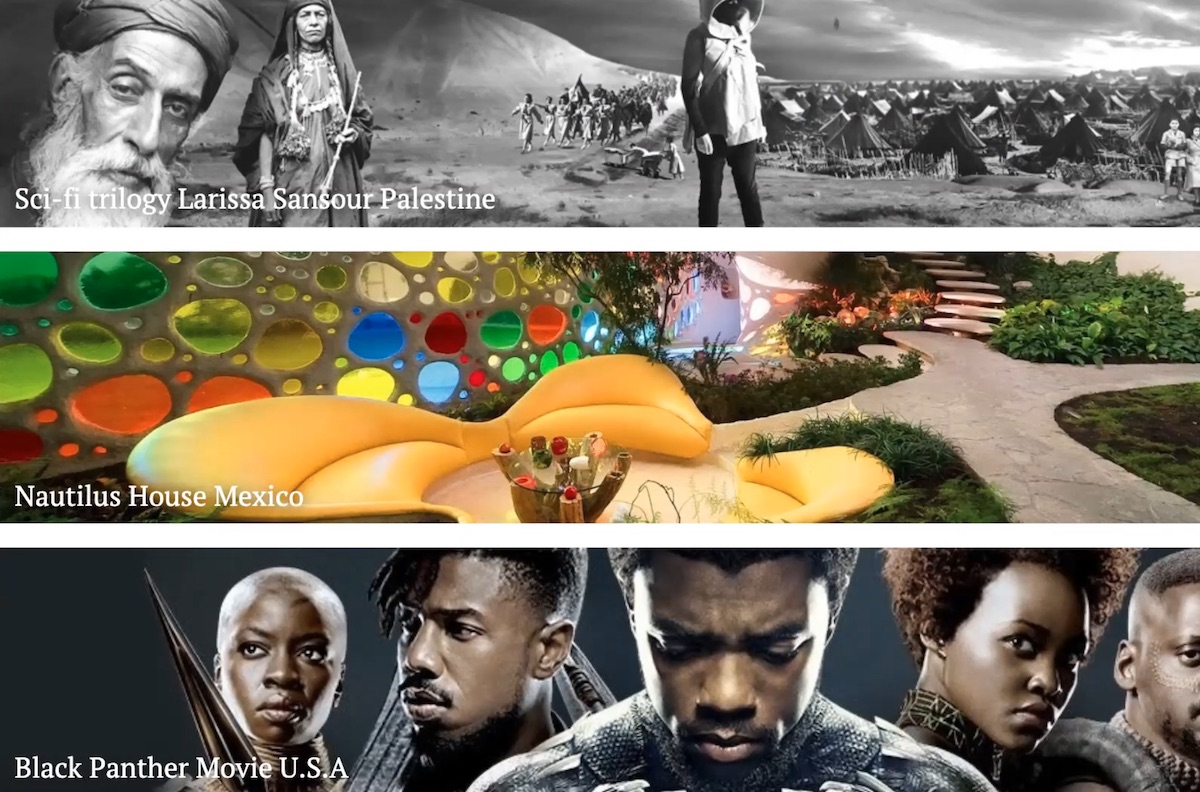 The futures represented above demonstrate imagination used to reshape dominant narratives of an ethnic or racial group. Each future exists to show the potential future if/when that group controls power over its own narrative. Credits: Dar El-Nimer for Arts & Culture, Whimsical House – Nautilus House in Mexico City, Why Marvel’s ‘Black Panther’ Is Resonating Globally – Knowledge@Wharton.

The essence of the process is to first name and describe the future. With that future in our vision we can talk about, write down and even draw the narratives that surround that future. Those narratives describe a history that hasn’t been created – a history that isn’t dependent on today’s dominant narrative and its power.

Describe the future. Futures thinking for narrative change recognizes history but leaves today behind. We start by identifying possible futures. We get people out of the mundane. Look 10 years, 30 years or even further into the future. Get people to describe that future. Answer this question: Tell us what has fundamentally transformed?

The stories that got us there. We surface the narratives that had to change to create this future. Our goal is to get people out of their analytical box and tap into imagination. For some, this can be like a game.

Record these stories together. Speak them out loud. Write them down. Act them out.

The power to get there. Narrative change work provides people with a guide to creating new futures and the tools to practice doing it. We ask people to describe:

The Narratives of the Future Worksheet offers examples of the process and questions you can use in a similar futures process.

Narrative Initiative has used this process with several campaigns, convenings and organizations including the Atlantic Fellows program, a statewide narrative project in Minnesota, and leaders working on narrative responses to the global rise of populism. 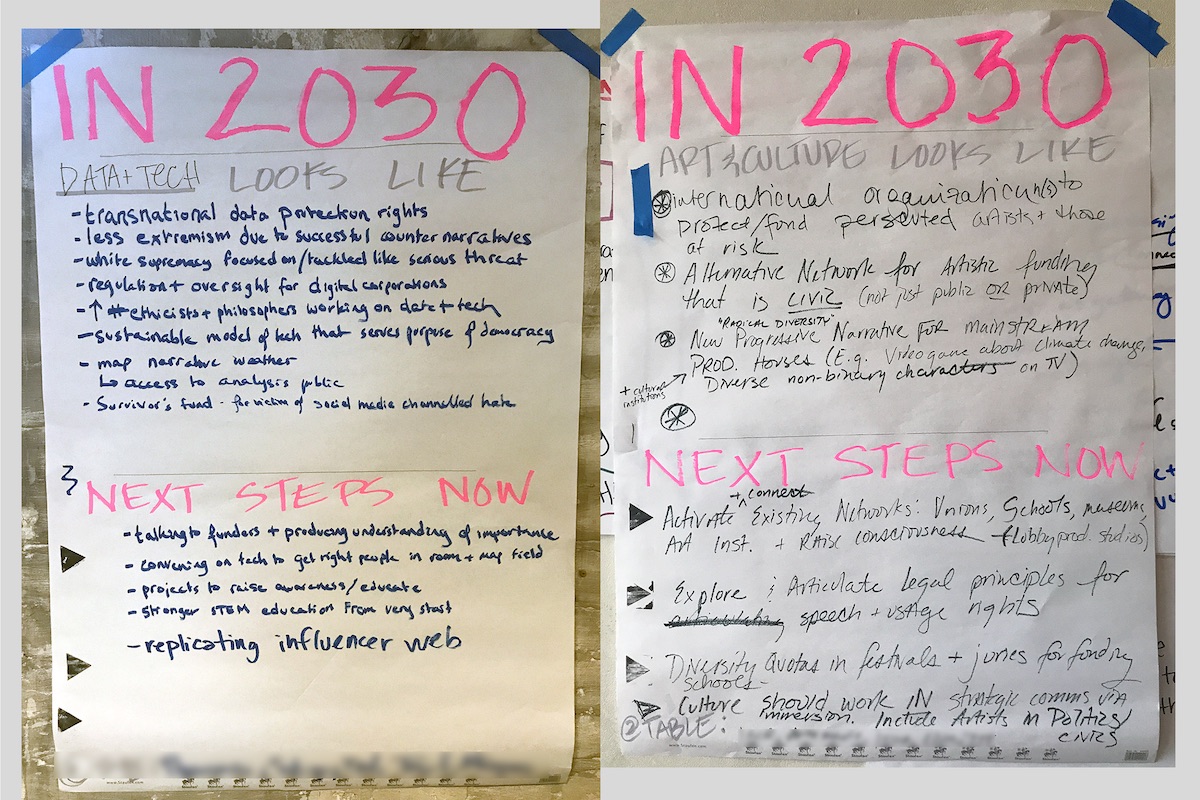 In 2019, Narrative Initiative guided Meeting the Populist Moment participants through a futures exercise aimed at defining what societies free of authoritarian populism in 2030 would look like. These charts focus in on what Data+Tech and Arts+Culture would look like, as well as the steps needed to get there.

We can be the ones to create future narratives

Futures work is more accessible than you think. And we’re seeing it put to use more often. A futures workshop Greenpeace USA recently opened to activists and members is one example.

Yet we see far fewer projects in our sector than in corporations, governments and the military. This limits the scope of possibility. Even activists and progressives shy away from naming, describing and fighting for changes that match the scale of our challenges.

Corporate futures work is largely dystopian and undemocratic. These futures view people as consumers rather than citizens with agency.

COVID-19 has prompted many to ask if we live amidst a crisis of imaging. Professor Ruha Benjamin recently spoke to the need to take control over imagination and the future.

We should acknowledge that most people are forced to live inside someone else’s imagination! This means that for those of us who want to construct a different social reality, one grounded in justice and joy, we can’t only critique the world as it is, we have to work on building the world as it should be.
– Professor Ruha Benjamin addresses Columbia University’s School of Social Work 2020 graduates.

Imagination opens up our field of vision so we see beyond today. Most people operate inside a Cone of Probability. The future is based on what seems probable given our history. Futures work starts (perhaps unsurprisingly) in the future and works back from there. We look to provide a framework for creating narratives about the preferable. Not the probable. 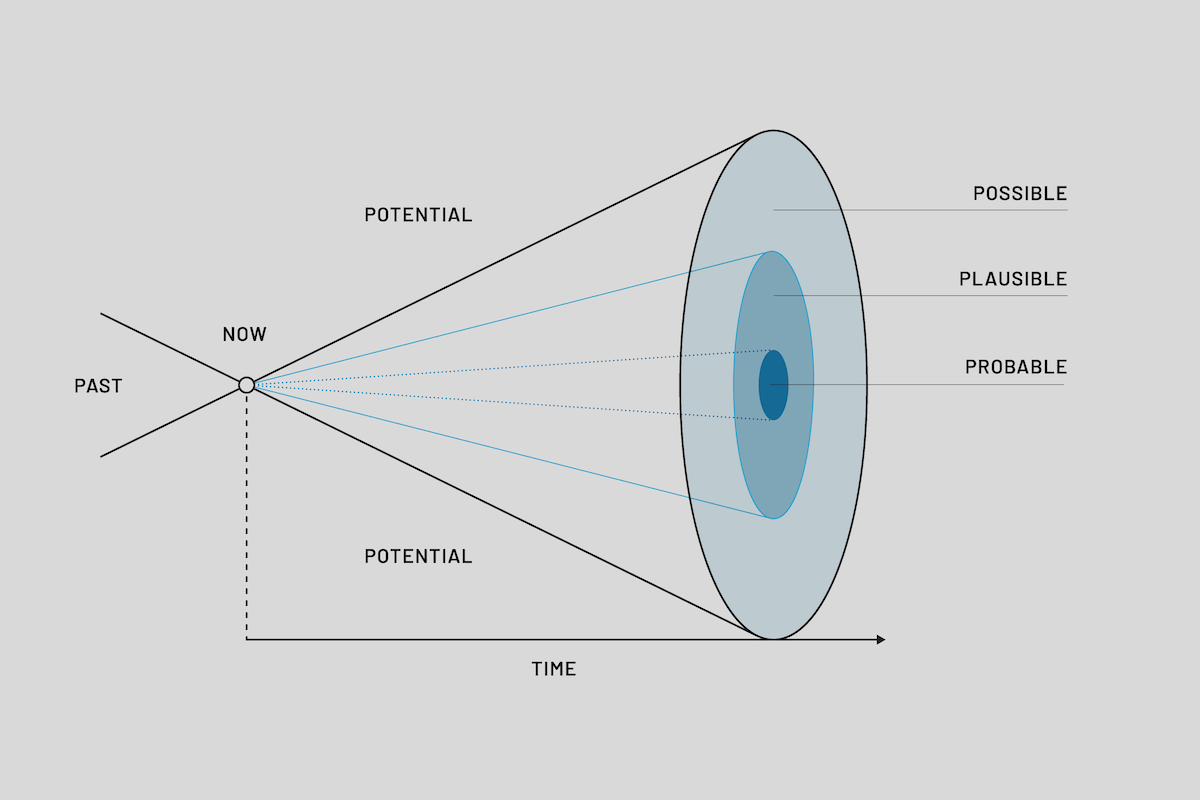 A futures cone represents the expanding breadth of potential future outcomes if we work from the right side of the cone (what’s possible in the future) instead of what’s probable now on the left side. We use narrative tools give people language to define actions that let us work with the possible, not just the probable. See Joseph Voros for more on the cone, its parts and uses.

Imagine futures and the narrative power to make futures possible

Our approach to futures is simple: Make it possible for people to use imagination. Describe imagined potential futures. Identify narratives that support that future. Give people tools to plan actions and systems that create new narratives. The power to create narratives is often the power to control the future.

Practically speaking, futures work defines a broader public good. Narrative interventions can translate and deploy those futures as powerful new narratives. It’s up to us – those organizing for equality and justice – to name futures, describe them, create the narratives and stories that turn them into reality, and come together in support of them.